Total energy capacity of a single Battery Module is 1.2 kWh. Battery modules can be charged in the vehicle or as stand-alone units (typical charging time ~7 hours). An external DC-source, such as the Gavia Mains Adapter, supplies power to the chargers.

Battery modules can be swapped in minutes for rapid turnaround of the AUV in the field. More than one battery module may be used in Gavia at the same time to increase the range and duration, typically 2 Battery Modules will be used to give 8+ hours endurance in full survey configuration. A Gavia team on a 24 hour operations survey job might take 6 Battery Modules: 2 on the vehicle, 2 on charge, and 2 fully charged ready for a fast swap.

The Battery packs in the Module will start to degrade in capacity after approximately 200 charge / discharge cycles and may need to be replaced. Battery modules need to be shipped as dangerous goods, separate from passenger planes. The modularity of the Gavia AUV means that Battery Modules can be shipped in advance to an operational site while the vehicle is still in use elsewhere, then the rest of the AUV can be shipped via standard means immediately prior to the job. ​ 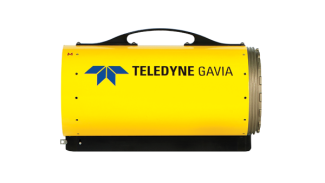