The GeoSwath Plus Sonar Module contains a wide-swath bathymetric sonar suitable for a range of survey and inspection tasks.

The GeoSwath Plus is a 500kHz interferometric sonar, or phase detecting bathymetric sonar (PDBS) from Kongsberg GeoAcoustics. Boat-mounted GeoSwath sonars are used worldwide for high accuracy surveys including port and harbour navigation and environmental mapping: the Gavia’s GeoSwath module makes this capability available in a commercial AUV.

The GeoSwath Plus offers: wide swath coverage of up to 12 times the AUV altitude when near the seabed; integrated bathymetry with simultaneous true digital side scan; high depth resolution suitable for IHO survey standards; as well as the accuracy and repeatability of a boat-mount hydrographic survey system.

Like most of the survey-grade sensors on the Gavia AUV, the GeoSwath data is time-synchronised with the AUV master clock using the vehicle PPS/ZDA system. Benefits of the GeoSwath AUV module include ease of deployment, ease of use, reducing survey time, and the ability to take a 500kHz high-resolution sonar down to targets in 1000m of water.

Note that for best results the GeoSwath Module should be deployed with a direct-reading sound velocity sensor (option) in the Control Module, and one of the high-accuracy INS/DVL Navigation Modules for motion sensing. 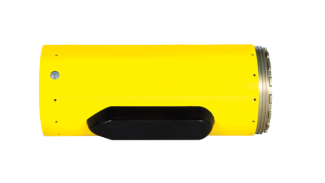