The Gavia AUV is an ideal platform for shallow seismic geotechnical data collection: the SBP is in a very low noise, low dynamic environment and the AUV can keep the sonar at a fixed height above the seabed, optimised for seismic data collection, with none of the issues seen on boat-mount or towed systems such as surface and vessel noise, heave, swell and cable snatch, and tow position uncertainty. As the AUV can approach close to the seabed in up to 1000m of water, the ping update rate can be maintained whatever the water depth (up to 15pps) and the sonar footprint can be kept small, allowing ping stacking for noise reduction and also giving enhanced spatial resolution compared with boat-mounted systems.

The high frequency seismic system gives very high resolution layer separation (~0.3ms FWHM) and centimetric detection of changes in burial depth. SEG-Y data is recorded on the AUV, containing both correlated and uncorrelated data, along with the transducer depth in the SEG-Y trace headers. Synchronisation with the AUV master clock is via PPS for accurate navigation and motion correction. The SBP module for the Gavia AUV gives users the ability to quickly integrate sub-bottom profiling into their survey suite. The combination of SBP, side scan, swath bathymetry and camera modules on the Gavia AUV provides a true multi-dimensional look at the ocean floor and sub-bottom layers from a cost-effective, man portable, self-contained survey solution. 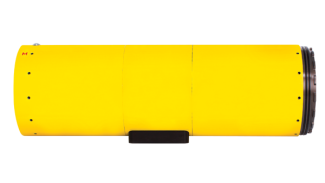